The following sections summarize the new features in STDM 1.5.

STDM 1.5 is a full release which includes enhanced functionality and stability improvements. The changes include the ability to save configuration as draft; copying an existing data profile; additional customization options pertaining to social tenure relationship; simpler importation of lookup values; direct switching of data profiles; identity tool for accessing the main information pertaining to a spatial unit (such as tenure status and related parties) and user interface enhancements in the GPS import tool.

Copy Data Profile from Existing One

This time saving Database Configuration feature allows you to make a copy of an existing profile as shown in the image below. If you identify a profile in your configuration that you would like to use as a template, now you can replicate it, rename it, edit and use it without designing a new configuration from scratch. This feature greatly saves on time and increases productivity.

Save Configuration as Draft

This feature provides the ability to save the current customization as a draft as shown in the image below. If one is configuring a complex profile that might take hours or days to finish, it is now possible to progressively save the customization as a draft until completion. The draft copy will be loaded automatically next time the Database Configuration Wizard is loaded.

The text input boxes for defining the profile name, entity name, column name, lookup name, and lookup Value name attempt to automatically update the entered text such as space and uppercase letters. The validation shows an error message when typing invalid characters as shown in the image below. 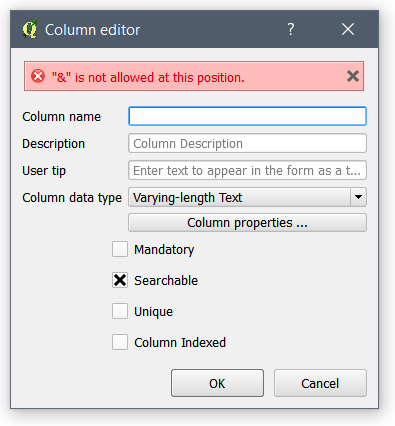 Users can also copy paste characters with space and capital letters in the text boxes.

This is a decimal data type with a minimum of 0 and maximum of 100. The image below shows the Percent column in Column data type drop down menu. 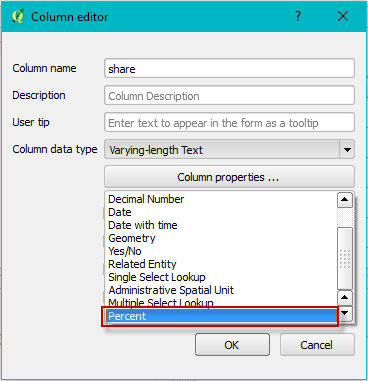 The input widget in the entity editor corresponds to a spin box with a ‘%’ suffix appended to the value as shown in the image below. 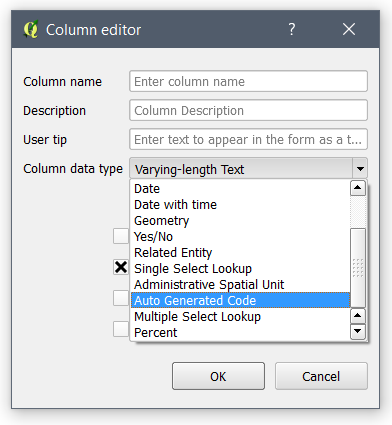 One can set the column properties such as the source table of the code prefix, code separator and leading zero as shown in the Column Property below. 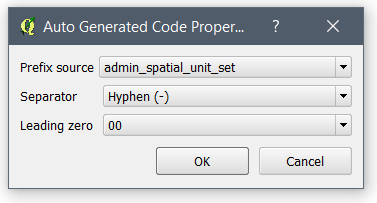 The column type generates unique codes automatically based on the selected prefix source as shown in the image below.

The decimal column type is enhanced with the ability to change the number of decimal places and the precision as highlighted in the image below. 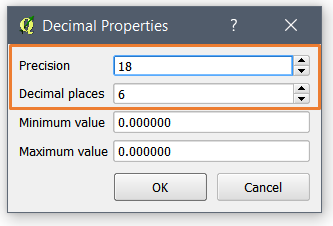 The basic data model of a profile’s social tenure relationship can now be visualized in the configuration wizard as shown in the image below. The model can be annotated with user-defined text and exported as an image file. This is useful in helping to visualize the linkage between the social tenure relationship entities as well as using the image files in reports, presentations etc. See the red-colored box labelled ‘c’ in the image below. 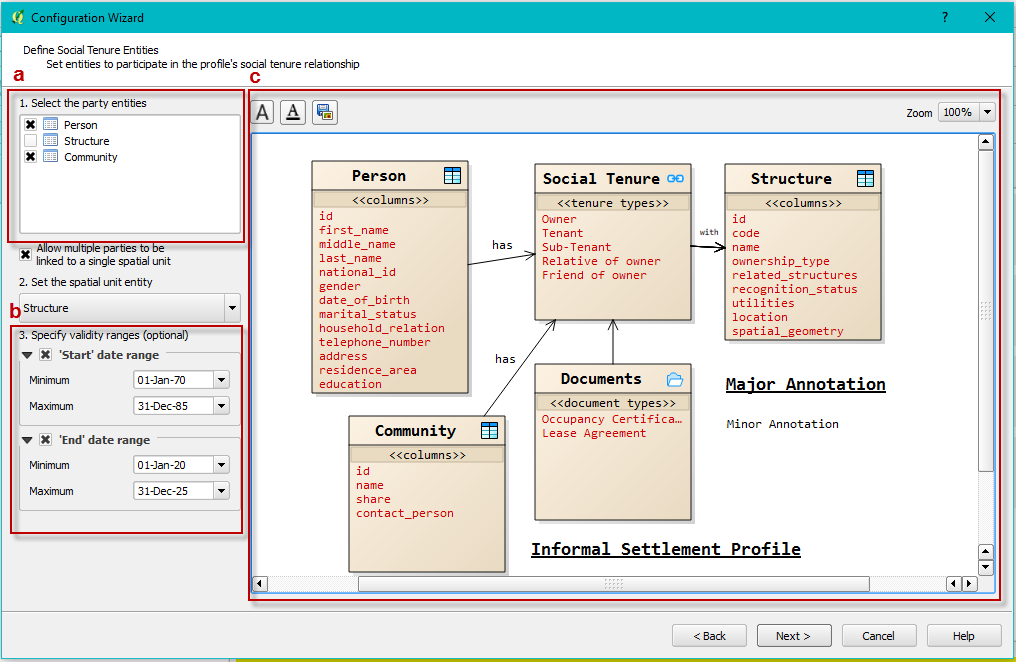 An additional Social Tenure Relationship database view is now created upon configuring a new data profile. This view uses the spatial unit id as its id column. This makes it easy to design and generate documents for profiles that may have a party linked to more than one spatial unit. Consequently, two default database views are created:

The process of setting the current data profile has been significantly simplified with the addition of a profile selection combobox in the STDM toolbar as shown in the image below.

The Social Tenure Relationship Editor has been completely revamped by utilizing a tree structure and a single page design that makes creating an STR record very quick and easy thereby reducing time in repetitive STR creation workflows.
Local Spatial Unit Preview
A local map preview has been added on the existing web preview of spatial units as shown in the image below. 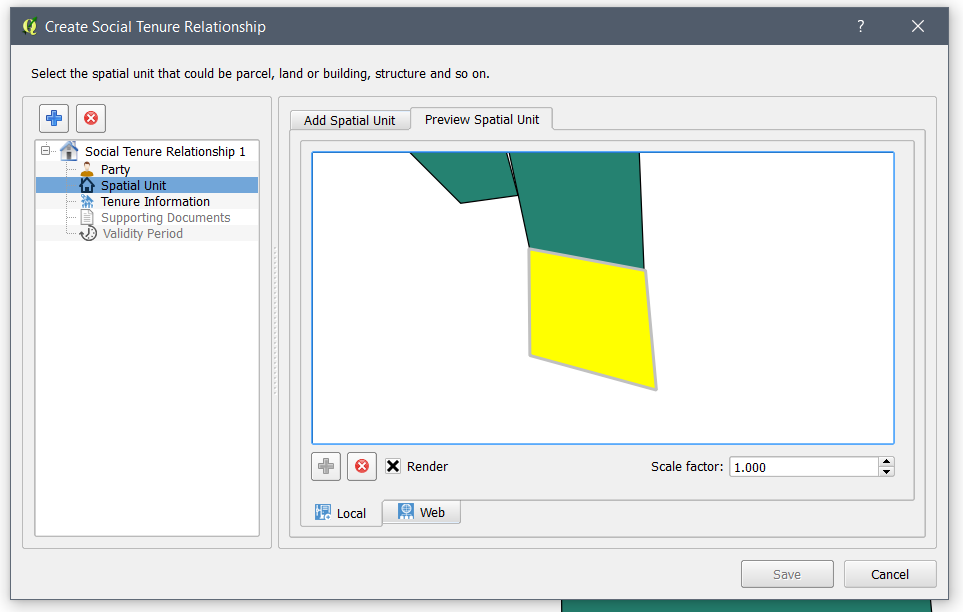 Multiple Party Entity
Users can choose more than one party entity to be linked to a spatial unit as shown in the image below. The party entities must be selected in the Configuration Wizard.

The Tenure Share option has been added in the Tenure Information section. This feature enables the user to specify the tenure share for the spatial unit as a percentage. The module automatically updates the other party records’ tenure share when the share of one party record is manually changed by the user.

Users can specify the tenure validity period by choosing the start and end dates of the tenure agreement as illustrated in the image below. The tenure duration box enables the user to specify the date ranges by entering number of year or months, this is used to automatically compute the end validity date.

Users can add multiple social tenure relationship records without re-opening the editor as illustrated in the image below. 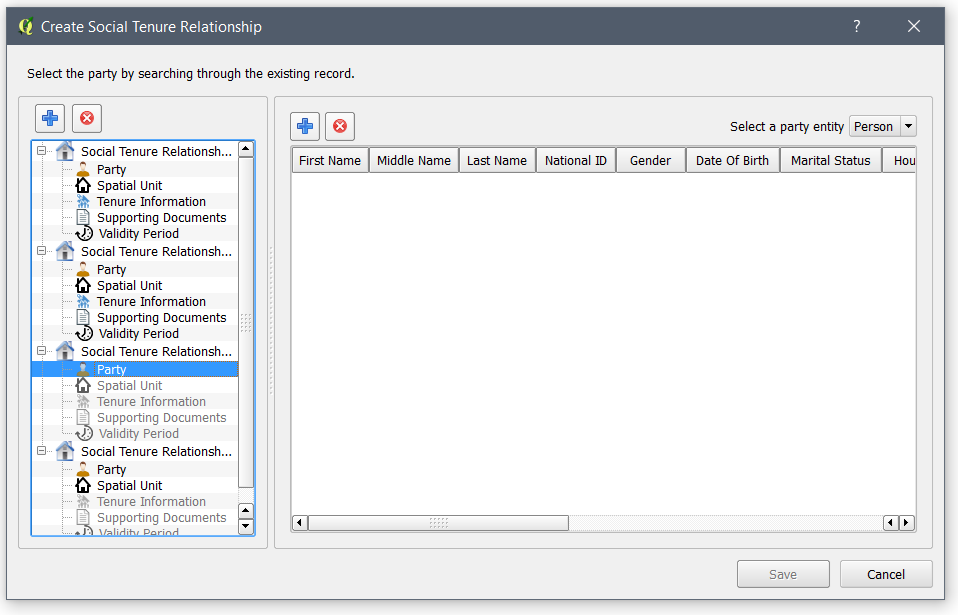 Searching of STR records is possible using tenure validity period as shown in the image below. The filter can also be disabled using the checkbox in the Validity Period tab.

A Subform inside the Primary form of STDM is added to enable the user enter records on a different entity that depends on the Primary Entity. It also enables the user to edit and delete records from within the Subform. For instance, within a Household Entity Editor, you can add a record of Household Income Entity as shown in the image below. 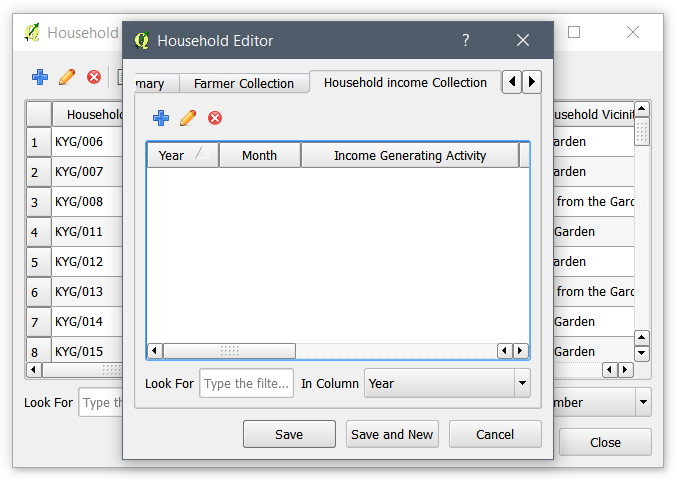 A lookup value translator has been incorporated to enable easier importation of lookup values as shown in the image below. Previously, one would need to use the related table translator. Using this new option, the only requirement is to specify the matching lookup table in the STDM database and configuration. A user can also specify a default value (from the selected lookup table) which will be used in case the value from the source table is not found. 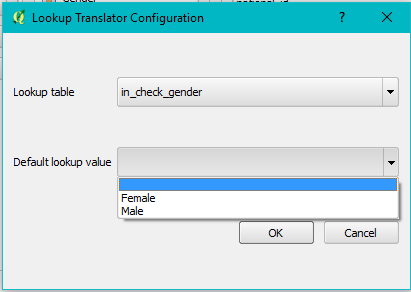 The GPS Feature Import has been completely redesigned into a single window where GPX file source and coordinate points selection is in one tab and attribute-related tabs such as Primary, Supporting Documents, and Collections tab are in separate tabs as shown in the image below.

In addition, the tool enables users to rearrange point positions using drag-and-drop. To make it clear to the user on the impact of the changes, the selection and removal of a point automatically updates the preview map. Moreover, when selecting a row, a user can view which point they have selected as it is also highlighted in the preview layer. A user can also edit the values of each coordinate pair by double-clicking the Longitude and Latitude fields. 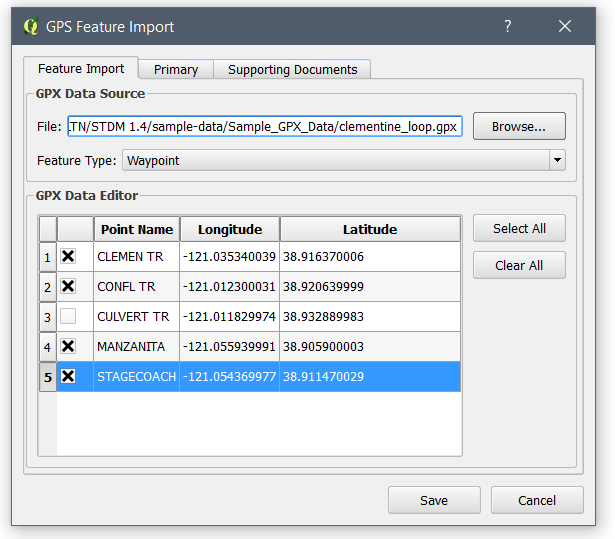 The Spatial Entity Details is a new module that provides a hierarchical view of Spatial Entities and Views by selecting one or more features in the map canvas as shown in the image below. If the vector layer is a Spatial Unit, it also displays the social tenure relationship information similar to the View Social Tenure Relationship module. Editing, deleting and the viewing of supporting documents is possible for relevant entities. 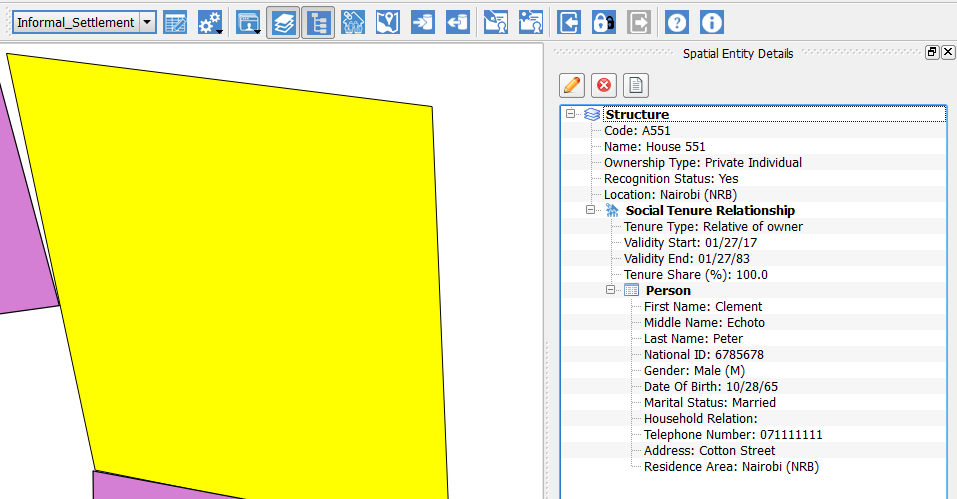 Multi-Selection of Records and Features 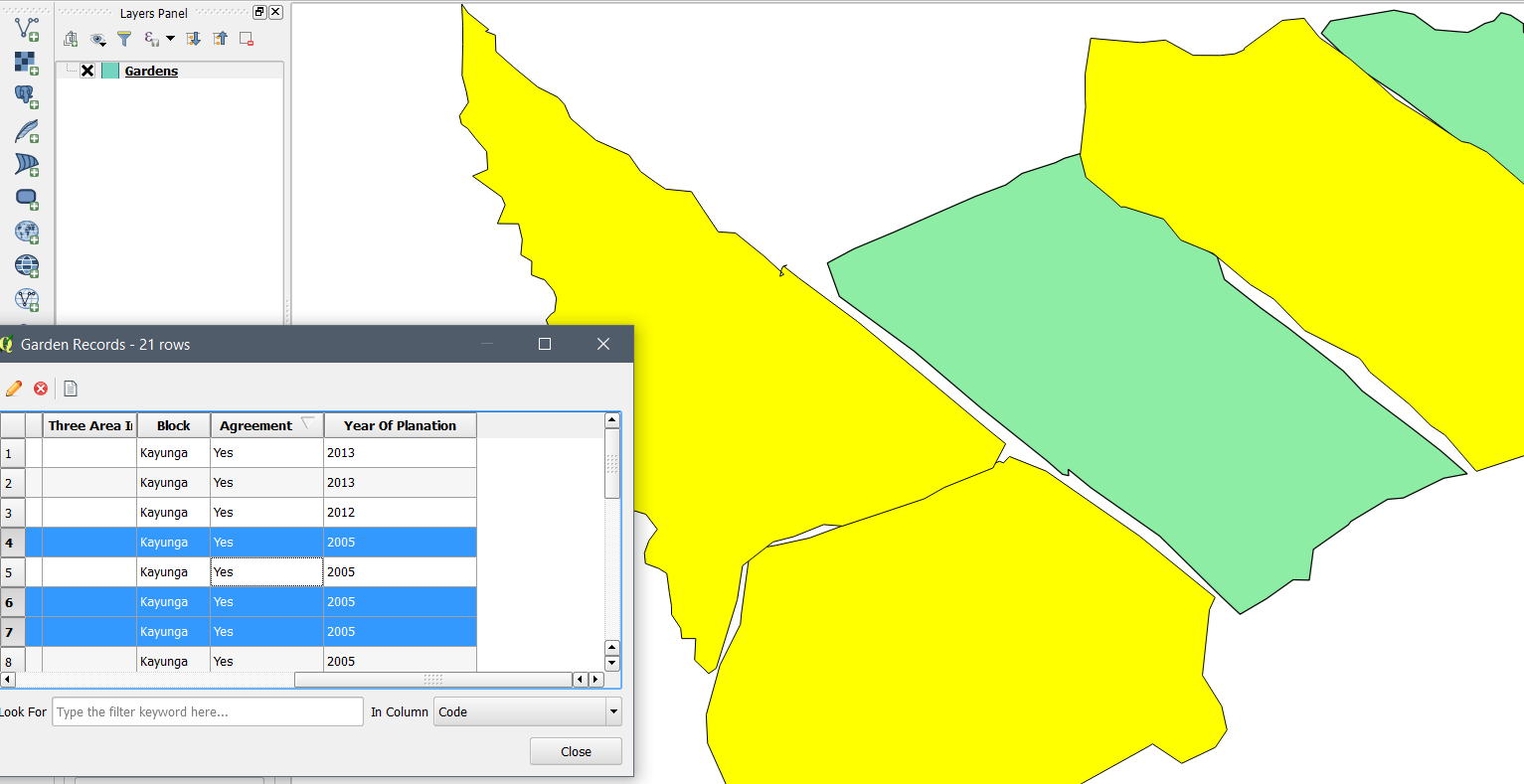 The Spatial Entity Browser does not block the clicking of other STDM and QGIS user interface elements. This change enables the user to add a layer, pan the in the map canvas, etc.

The attribute table composer item used by the Documents Designer has been updated to the latest version of QGIS attribute table item. This upgrade has enabled Item properties panel of the STDM attribute table to add useful option under the Appearance options such as adding empty rows, hiding/showing header, wrapping text, and other customization options as shown below. 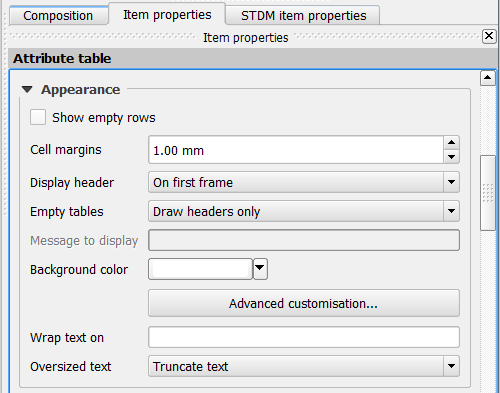 A check box to enable or disable debug mode has been added in the Options module as highlighted in the image below. 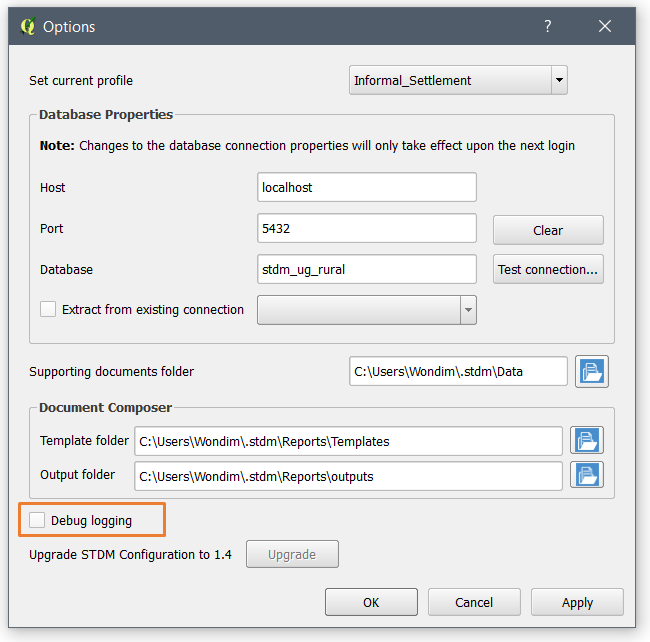 The all-in-one installer for STDM 1.5 is built upon the following packages: PostgreSQL v9.5, PostGIS 2.2 and QGIS 2.18. STDM is also compatible with QGIS 2.14 and 2.16. See the links below for the full list of feature updates.