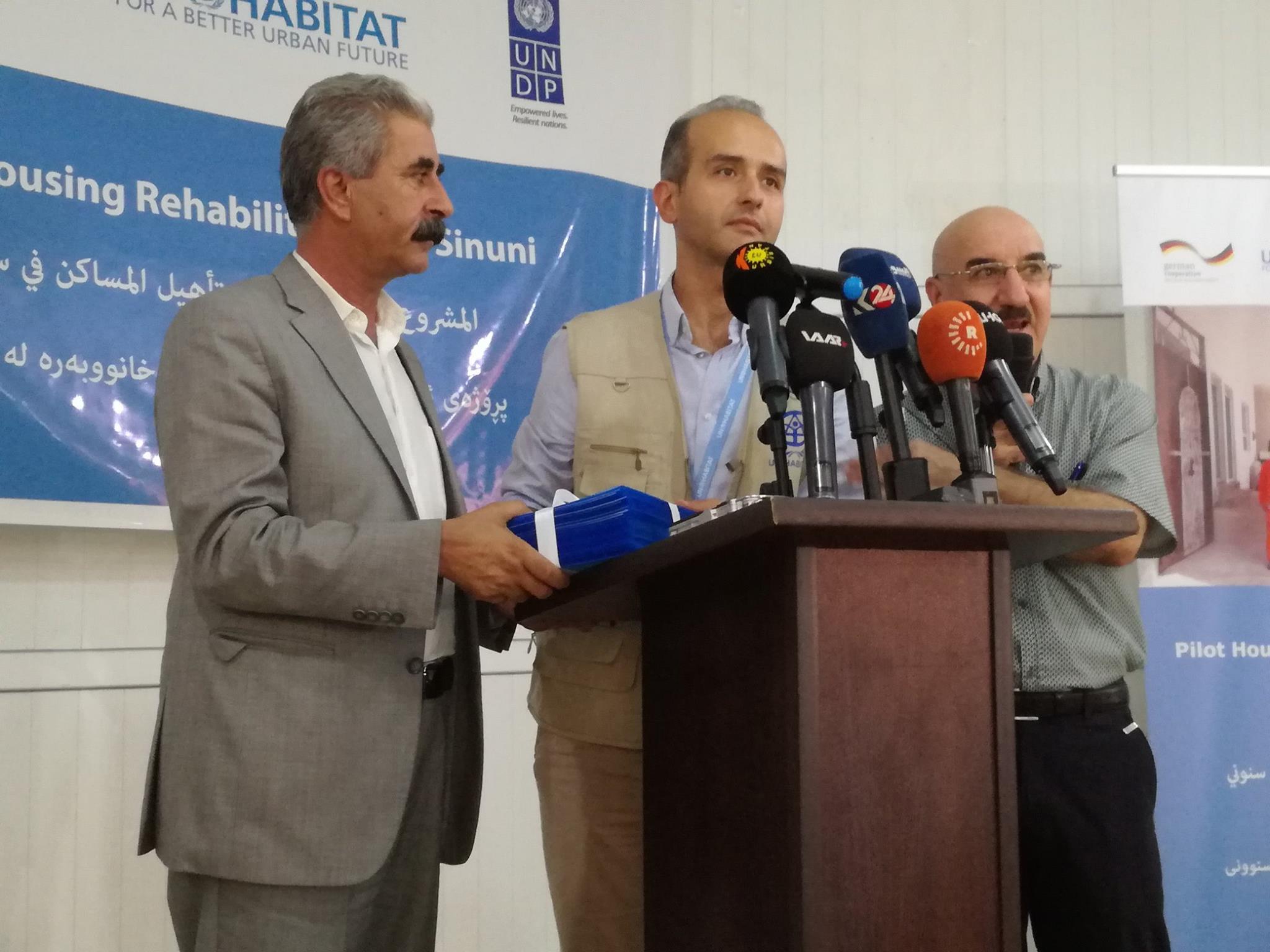 Posted at 08:26h in IRAQ by Hellen Nyamweru 0 Comments

Read this interesting piece and learn how the STDM has been applied to facilitate the issuance of occupancy certificates to Yazidi families in Ashti.

The application of the STDM served to ascertain the varied claims of the returnees in the process. The issued certificates have been endorsed by the local authorities as well as the community members.

Following the ISIL/Da’ish offensive on Sinjar district, over 275,000 people from Mount Sinjar area – including a vast majority of Yazidis – were driven out of their homes. Abandoned Yazidi settlements were either systematically demolished or seized by ISIL fighters. Some 3,000 homes are thought to have been destroyed or burned down in the sub-district of Sinuni alone.

As part of the UN-Habitat’s Urban Recovery Programme, in partnership with the Nineveh Governorate, 562 damaged houses were rehabilitated in 11 villages across  108 of which are in the town of Ashti. The project was supported by the United Nations Development Programme (UNDP)’s Iraq Crisis Response and Resilience Programme (ICRRP) with generous funding from the Government of Germany.

This ceremony celebrated the completion of the Pilot Housing Rehabilitation project in Sinuni, which facilitated the returns of approximately 3,000 individuals to their restored houses, and the distribution of occupancy certificate to Yazidi families in Ashti. Alongside the technical rehabilitation of damaged houses, the project put a very strong emphasis on the human rights of adequate housing and tenure security as essential pillars of healthy, functional, resilient communities. This is inevitable in the case of the Yazidis, who were subject to protracted discriminating policies in the area where they were prevented from tenure security for decades. Using the Social Tenure Domain Model, a tool developed by UN-Habitat and applied in numerous countries, the UN-Habitat team conducted community consultation meetings to verify the occupancy claims of the returnees, and issued the occupancy certificates that are endorsed by local authorities as well as community members.

The project promotes sustainable and resilient towns for returnees — beneficiaries and rightful occupants — through the rehabilitation of housing and infrastructure, along with the recognition of their right to property and occupancy. The project adopted a community-based approach involving local private contractors, direct engagement of the local community in the rehabilitation work, and an effective partnership with the local authorities. The community-led approach builds self-reliance of local communities and authorities; secure recovery investments that remain with the community, and ensures security and protection, while re-establishing bounds and cultivating a spirit of peace-building and social cohesion among community members. Ultimately, the project promotes the right to adequate housing for vulnerable families who have been denied access to land and property rights for decades and have seen their houses destroyed during ISIL’s invasion of Sinjar. It also complements the reconciliation efforts made by the United Nations Assistance Mission in Iraq (UNAMI) and UNDP.

His Excellency Dr. Cyrill Nunn, Ambassador of the German Federal Republic, called in remembrance the violence and atrocities against the Yazidi community by ISIS . “These acts against human rights and religious freedom should never be forgotten”, he stressed. The German Ambassador emphasized, that the housing project, funded by Germany, is an important step to allow many Yazidis returning home. Beside this physical support, another important step will be to address the psychological needs of those Yazidis, who have suffered so much under the control of ISIS. Germany stands ready to continue its support also in this area.

Dr. Erfan Ali, the Head of UN-Habitat Iraq underlined the strategic importance of this intervention to facilitate return, not only by the physical rehabilitation of damaged houses and infrastructure but also by addressing tenure rights of the returning families, stressing that “Recognizing the housing occupancy rights for the Iraqi Yazidis since decades in this area is a ground-breaking achievement, and is a necessary tool for prompting more returns to the area.”

On his part, the Vice Governor of Ninewah Mr. Abdelqader Sinjari thanked the Federal Republic of Germany for its contribution to the rehabilitation of the area, and underlined the need for more interventions and rehabilitation efforts in the district. He also underlined the importance of the occupancy deeds that were distributed by UN-Habitat.

On behalf of the people of Sinuni, the Mayor/Qa’immaqam, Mr. Nayeef Saydoo Qasem thanked the tangible results delivered under the project. He emphasized the level of destruction to the area, and stressed that additional support is needed to facilitate recovery and reconstruction. 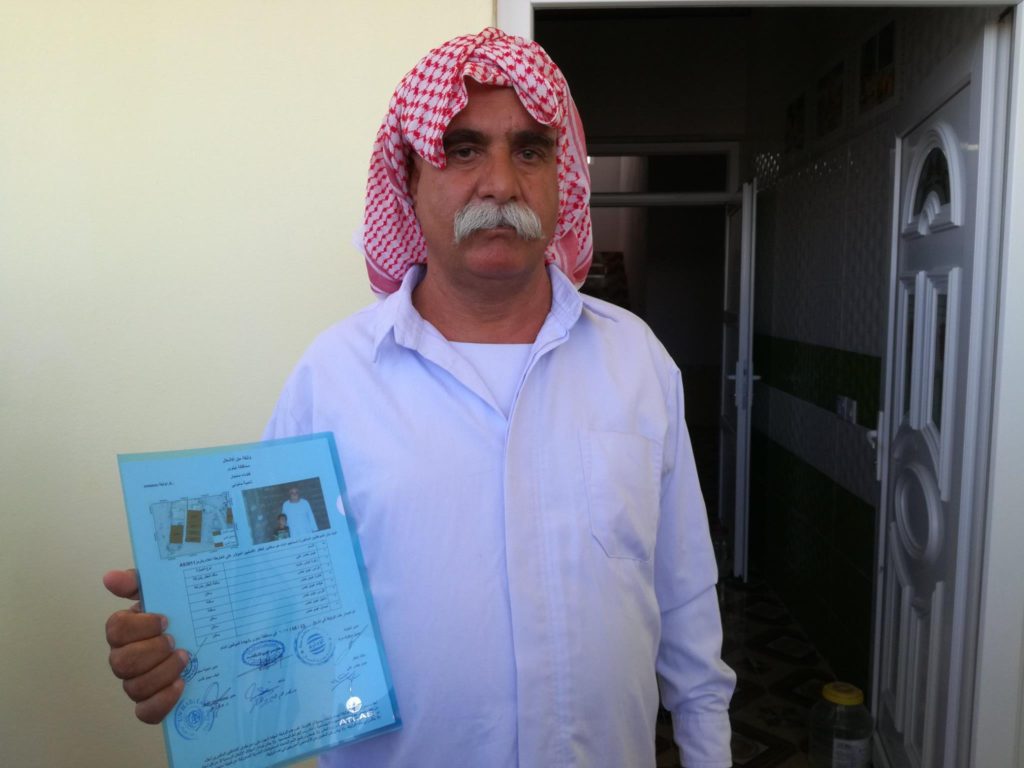 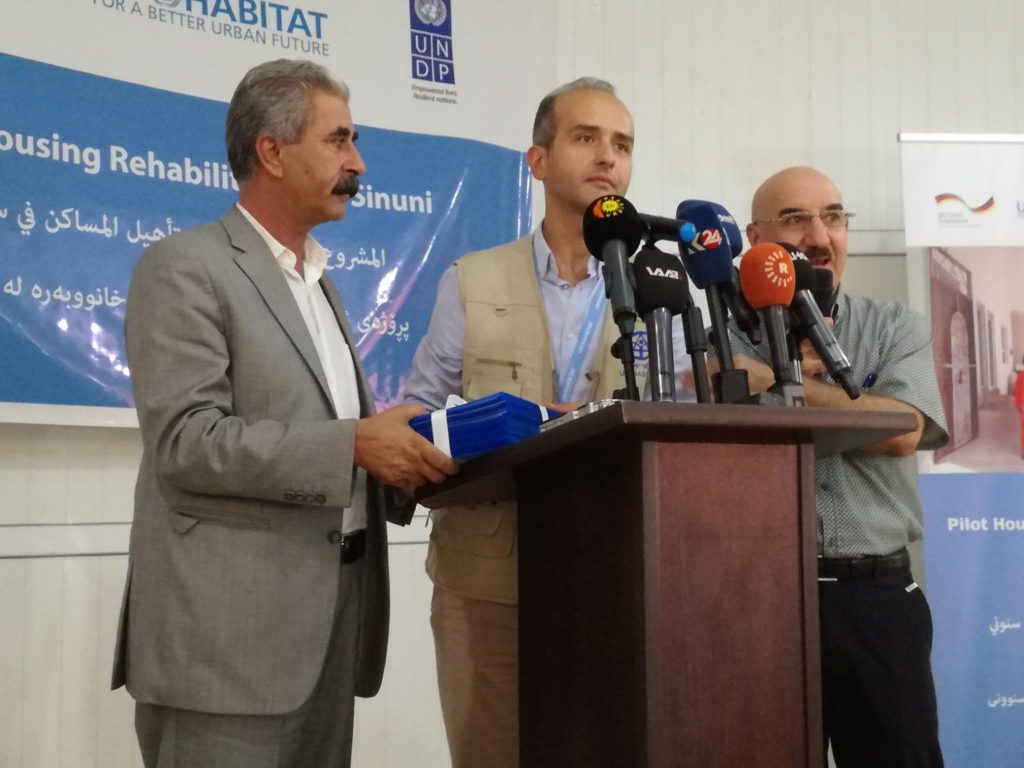